WHAT IS THE TWELFTH NIGHT? 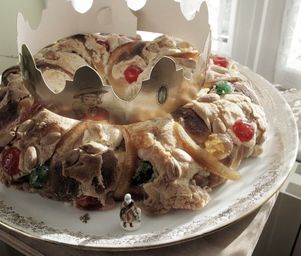 This is a picture of a modern day recipe of a "Twelfth Cake" baked on the Twelfth Night.
The Twelfth Night actually refers to a Christian festival practiced by the Church of England (among many others) at the time Shakespeare was writing Twelfth Night. This rambunctious twelve-day festival, also known as the Christmas Revels, happens on the 12 days following Christmas as a way of honoring the birth of Jesus and the three kings who bore him gifts. For the Church of England, the twelfth night falls on January 5th, also known as the Eve of Epiphany. Epiphany is referring to the "appearance" or "discovery" of Jesus's divinity and was the day the three kings brought Jesus gifts. So people would celebrate by feasting and drinking to their heart's delight, dancing, gaming, and other merry-making activities. In fact, the feast of Epiphany was a time of opposites. Roles were switched, and many jokes were played. In fact, the fool of the group was often named the Lord of Misrule.

On the twelfth night of the festival, a traditional Twelfth Cake (as some may call it) was baked with a bean and a pea inside, or in many parts of England a pure silver coin. Whoever was served the piece with the pea was designated Queen, and the bean was King of the evening! Discovering the hidden ingredient or silver coin emulated the Epiphany... think "A Big Reveal." Only a handful of people still celebrate this festival, and most of the celebrations have been modernized to suit the current day. However, the focus has still remained heavily on food and drink (go figure!). Even though England no longer has solid silver coins, you still might find a partially silver coin in a Twelfth Cake on January 5th, if you're in the right part of town, that is. You would definitely be able to see this tradition taking place for Mardi Gras festivals happening today.

So, what is a festival without entertainment? This festival was shaped around entertainment, and Shakespeare likely wrote this play with the intention of presenting it on the Eve of Ephipany (January 5th), or the Day of Epiphany (January 6th). He would have wanted it to be worthy of the festival, expertly weaving in several connections. Perhaps these Christmas revels are why we see so much of a Lord of Misrule in Sir Toby Belch, a belligerent drunk intent on having a splendid time; or why disguises become so integral, like Viola posing as Cesario; and maybe even why Feste shares several songs with us. It is also possible the day of Epiphany is explored through each of the character's personal epiphany, as each one has a major moment of discovery. After all, what is a good mistaken identity play without "A Big Reveal"? 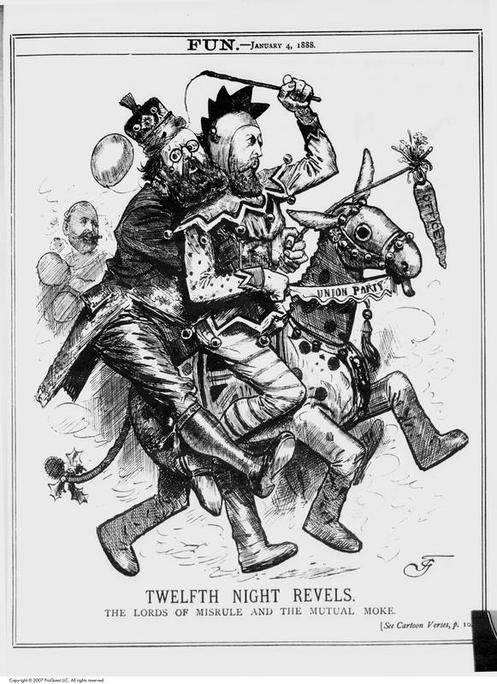 This image is from a cartoon published on January 4th, 1888 titled Fun. The subtitle at the bottom reads, "Twelfth Night Revels, The Lord of Misrule and the Mutual Moke" (moke is British slang for donkey). The poem to accompany the cartoon is as follows:

"IN days of yore the Lord of Misrule
Played very high jinks at the Tide of Yule,
And sported about like a chartered fool,
And did pretty much as he chose ;
There were scarce any bounds to his quips and cranks,
His lunatic larks and his motley pranks,
And victims who suffered e'en offered him thanks
For them of repose.

But although many things in our English clime
May be looked on as jokes at this festive time
Which on other occasions were almost a crime ;
There's a Lord of Misrule just now
Whose executive measures seemingly are
Upon sundry good citizens apt to jar,
And who carries his jesting a little too far,
As numerous men avow..."

While this poem and cartoon are satirical, we can sense an air of consequence in their words. What do you do when a joke turns sour? We've all been there, right? Or maybe we've been on the receiving end. Either way, perhaps see who you can draw comparisons to while you watch our production of Twelfth Night.​

GENDER AND THE GLOBE 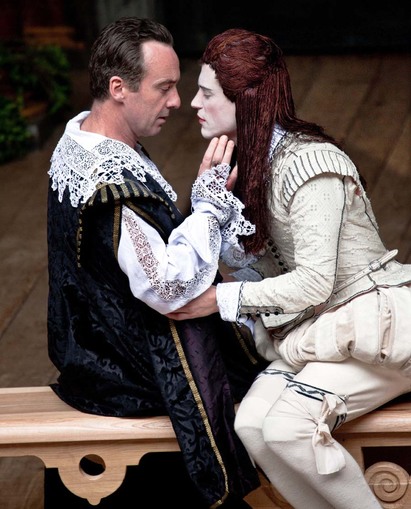 This image is from the Globe Theatre's 2012 production of Twelfth Night, featuring an all male cast, as it would have been when Shakespeare wrote it. Here we see Orsino and Cesario share a moment, AND what a male disguised female disguised male might look like.
Just a friendly reminder that in Shakespeare's day, young men would play female roles. Let's think about the math of Viola: a young man, dressed as a woman, disguised as a man. A little mind-boggling for a modern audience, right? However, the patrons at the Globe theatre were accustomed to watching men play women, at least on stage, as it wasn't legal for a woman to be onstage until after the rebirth of theatre following the Puritan no-theatre rampage of 1641.

Yet, it definitely wasn't legal to crossdress in the streets of Renaissance England. Women were not allowed to dress man-ish, or they should expect retaliation in some capacity: anywhere from a scolding to a whipping would do the trick. Apparently the stage was the only exception to this rule. But we also have to remember that Twelfth Night would not have been performed with a realistic set or even in the style of realism the way a modern audience is accustomed to seeing theatre. This likely helped an Elizabethan audience with their "willing suspension of disbelief" to understand how Orsino and Olivia could take Cesario for a young man.

However, the technicalities of theatrical practice in the 1500s doesn't explain why Orsino feels unusually comfortable around Cesario, and why Olivia falls for Cesario's charming "Viola-wit." Is it because Viola doesn't disguise her emotional and mental femininity as much as she does her physical femininity? Is it her "feminine touch"--her understanding, warmth, wit, and honesty--that makes her so approachable? I suppose that's up to us to decide.